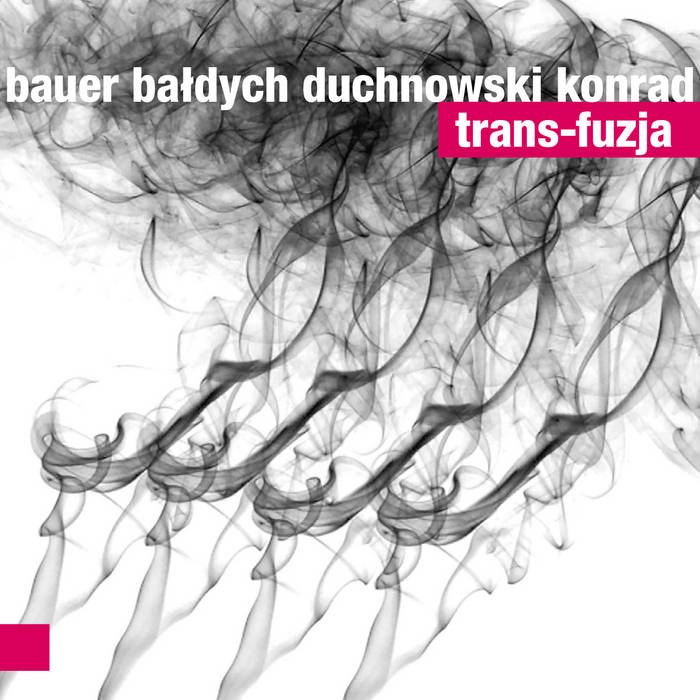 In Trans-Fusion, as in For Tune: the outcome of the components is more important than the word which they form. A medical transfusion, though introducing a foreign body into an organism, is supposed to revert it to its original state. Bauer Trans-Fusions aim towards achieving a new form and quality. Andrzej is an exquisite soloist, and could pattern his life on this basis. But curiousity drives him to people and their worlds, to sounds and their contexts. To Szpilman's tiny studio, in turn, a line of people is driven, who are very unlike each other: baroque and folk musicians, classical and popular, professionals and naturals, virtuosos and collectors. This time – along with the inaccessible Cezary Duchnowski and his electronic basso continuo – he took two full-blooded jazzmen, who willingly venture beyond stylistic boundaries.
Therefore, we have a true quartet. The warn, rich sound and refined phrasing of Adam Bałdych. Drummer Cezary Konrad, with whom even the quietest, single tone is a power plant. The colorful polyphony of a second Cezary, as well as humorous keyboard play. Finally the earnestness, reverie and lyricism of the host himself (who even gnashes lyrically). Listening, it's worth paying attention to the micro-transfusions, between individuals, texts and styles. Allusions, sometimes bordering on parody, or intuitive associations. There's a lot of liberty, but there's no disarrayed “free”, going nowhere; a transparent logic is evident – whether it be in the individually composed pieces, or in the group efforts. The famous quote by Varèse and Hoene-Wroński comes to mind, about “the intelligence that is in sounds”.
Someone will say: there's no rebellion here, no suffering, destruction. But does there have to be? A transfusion is something different than an amputation.
(Rafał Augustyn)