from Migratory Poets by Adam Pierończyk With Anthony Joseph 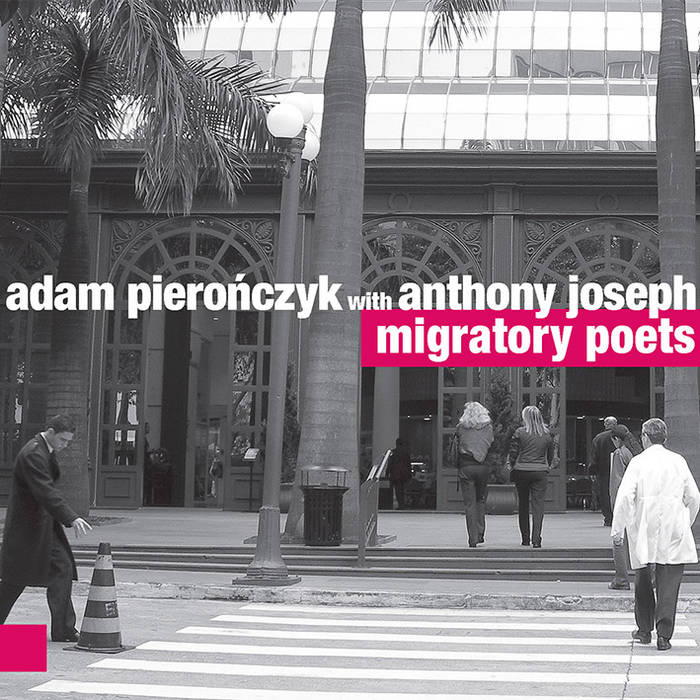 Sun Ra was on the ark. Prince Nico Mbarga, he was on the ark. So was Art Taylor and
Sonny Simmons, Bessie Smith and Superblue, all on the ark and Joe Tex and Mitty
Collier, Leon Thomas and the Roaring Lion, even Robert Aaron and Lou Ciccotelli were
abdominally on the ark. The original Defosto himself was also on the ark, beat rivers of
song upon the omele drum, just a cutlass carpenter, no skill with timber, four eyed fish
were on the ark. Who playing war and fraid blood? Who playing mas and fraid powder?
Who prevaricate and ruse, throwing holi powder as ritual upon the ark, but don’t want
ink or powder to touch their clothes? Who else was on the ark? Max Roach was on the
ark, and Chick Webb and Buddy Rich, Ras Shorty I and David Rudder, Belafonte and
Eric Dolphy, them was high up upon the ark. Babatunde was on the ark, Olatunji, mama
drum, say you coming to come and you never reach as far the leader house, his records
and sawed off speaker drum, to boom dub roots box all round the village, bachelor life,
and then you hear he bulling some woman in the congregation, and then your hear the
shepherd sanding crook-sticks, and tapping his foot when the hymn swing, but is suffer
he suffering in silence, because the woman bulling is and he don't need to be a see-er
man to see, so he burn his own house down, he was on the ark and the ark was almost
full. Iron tete was on the ark, and Railway Douglas, the wild moon, fever in his throat.
both were on the boat, the ark was full, but more was to come and coming still. Ethel
Waters was on the ark singing ‘Carib Gold, Octavia Butler, hip good, high up on this
boat. Slinger Francisco, the Mighty Sparrow, robed in African wax print and dancing as
man, Eric Williams, dead and living same time in secret, also wrapped in kente cloth,
Larry Lee, masked and southern drawling, Fats Waller, Art Pepper, Sonny Criss, Miss
Bobbye Hall, Gang Gang Sara, blown from Guinea to Les Coteaux Tobago, who climbed
the great silk cotton tree in Culloden with intentions to fly back to Africa, but fell to
stony death because she had eaten salt, she was on the ark, as was The Mighty Spoiler,
The Mighty Terror, The Mighty Broclax, in proper soft pants, same dead living among the
dead, as taxi driver or stevedore, leaning into a cacophony of whores, and when the ark
had two days to go before it reach Southhampton, here come John La Rose, here come
Charles Mingus, here come Woody Shaw and here come Rashaan Roland Kirk, Jean
Michel Basquait, Bo Diddley, Beryl McBurnie, even Olive Walke could walk upon that ark.
This was years long since the firearm ban, when the river washed down and cleansed the
city, and who eh drown waterlogged, and who not dead, badly wounded. Jan Carew was
on the ark, and Dominique Gaumont, as was Milton Cardona and Rosetta Tharpe,
Odetta, Mandela, Biko, Toure, Marcus Garvey, George Padmore, all upon the ark. but not
Kamau Brathwaite, he was not on the ark, instead Baba, the great teacher had long since
evaporated into air, into language, into sound, into the sex fruit of poetry; oil does not dry
upon his tongue, nor honey on the tips of his fingers. And I saw Steven Samuel Gordon,
stood high upon the bow, and the ark drove down to Bristol, Birmingham and
Manchester too, it swooned to Alaska, New York, Boston, Philadelphia, Chicago, Haiti,
Cuba, Jamaica, Barbados, Suriname, it moves like a crown upon a board, it care which
way it chose to go. Look, it pass through Aruba, Trinidad, and Grenada, up the Orinoco
river, and never wear neck tie yet. It come up from the southern Caribbean all the way up
to Pascagoula bay in New Orleans. Yes, I saw the brother Spaceape, he was on the ark,
and he was blowing the big abeng!